Merck has reinforced the market-leading position of Keytruda (pembrolizumab) this year, reading out clinical trial data that extend the cancer immunotherapy's advantage over rivals like Bristol-Myers Squibb's Opdivo (nivolumab).

Keytruda's edge is strongest in lung cancer, where positive results from several Phase 3 studies have proven the drug's survival benefit.

That clinical success has translated into increasing financial returns. Sales of Keytruda jumped by 82% year over year to total just shy of $1.9 billion during the third quarter. 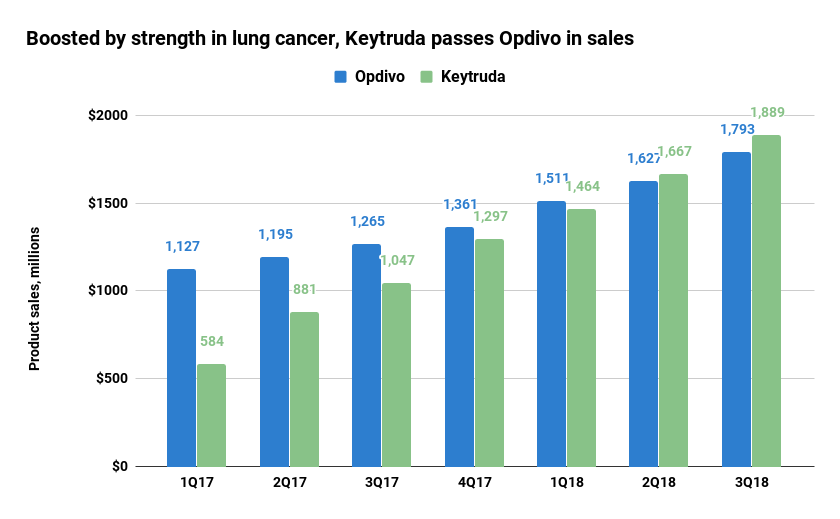 "There is no bolus of patients waiting to start on 1st line therapy and it takes some time to get the strong clinical data that Merck has released to date in 2018 out to community oncologists," Credit Suisse analyst Vamil Divan stated in a note to investors earlier this month.

"We expect market share gains for Keytruda to continue in the coming months," he continued.

With more cash coming in, Merck's freer to increase investment. The 15% increase to dividends, for example, is the largest since an 11% bump in 2012.

And Merck's new target of $16 billion in capital expenditures through 2022 is a third higher than what the company committed to only 10 months ago. Corporate tax cuts also play into this, as Merck sees continued benefit from the a major trimming of the top corporate rate signed law in December 2017.

Investors, however, didn't react positively in Thursday morning trading, initially sending shares in Merck down more than 5%. The stock subsequently gained back some of those losses, and was trading slightly below even by time of publication.

One question perennially on investors' minds is whether Merck will pull the trigger on any large deals. While the pharma has inked major partnerships with AstraZeneca and Eisai to gain partial rights to Lynparza (olaparib) and Lenvima (lenvatinib), respectively, analysts remained curious if more might be on the table.

"We have the capacity to do deals of all sizes and all types," Merck CEO Ken Frazier said on the third quarter earnings call held Oct. 25. "The question is are they the right deals for Merck."

In a statement on the dividend increase, Merck said it would maintain "ample capacity" for business development, which it called a "priority."

View all | Post a press release
Altasciences Expands Ligand Binding Laboratory to Meet High Demand for Bioanalytical Solutions
From Altasciences
Radiomics secures €6 Million to fund new projects and initiatives including its first prospe...
From Radiomics
IACT Health and LMC Manna Research Announce Strategic Alliance, Creating One of North Americ...
From IACT Health and LMC Manna Research
Sino Biological Newly Launched A Panel of Research Reagents for SARS-CoV-2 Omicron Variant (...
From Sino Biological Inc.
Editors' picks
© 2021 Industry Dive. All rights reserved. | View our other publications | Privacy policy | Terms of use | Take down policy.
We use cookies to optimize your experience on our website and for analytics and advertising purposes. By continuing to use our site, you agree to our cookie policy. Learn more
Accept