Merck and Bristol-Myers Squibb Co. hold a wide lead in the immuno-oncology market. Both of their drugs, Keytruda (pembrolizumab) and Opdivo (nivolumab), respectively, now rake in more than $1 billion in sales per quarter.

And with five checkpoint inhibitors targeting the PD-(L)1 pathway now approved, it has become increasingly more difficult for latecomers to compete in later lines of treatment. In first-line lung cancer, however, Merck stands alone, having won approvals for Keytruda and Keytruda plus chemotherapy.

That advantage, however, could be short-lived now that IMpower 150 has read out positive PFS data — although the degree of benefit and data on overall survival haven't been disclosed.

"Roche is now a real competitor in [first-line] lung," wrote Evercore ISI equity analyst Umer Raffat in a Nov. 20 note. Other analysts were similarly bullish on Roche's ability to compete in the NSCLC market.

The Swiss pharma plans to submit the data to the Food and Drug Administration as well as the European Medicines Agency. More detailed results will be presented by the company at the European Society for Medical Oncology's Immuno-Oncology Congress next month. 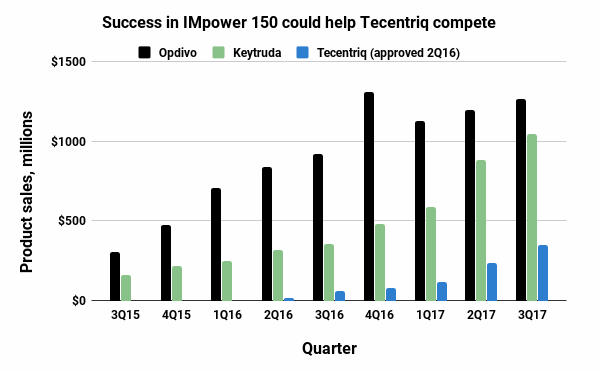 Many questions remain unanswered, though. Roche designed IMpower150 with three study arms: a group who received Tecentriq plus chemotherapy, another treated with Tecentriq plus Avastin (bevacizumab)/chemo and a control cohort administered with Avastin plus chemo.

Analysis of trial data was only powered to compare the Tecentriq plus Avastin/chemo arm to the control group. Still, it will be important to see how patients who only received Tecentriq and chemo fared.

Additionally, data on overall survival won't be available until the first half of next year. Roche said initial observations were "encouraging," boosting confidence that the combo could hit on both of its primary endpoints. Given Merck's current edge in the U.S. with Keytruda plus pemetrexed, demonstrating an OS and PFS benefit to Tecentriq plus chemo would greatly improve Roche's ability to challenge Merck in first-line lung cancer.

Merck won accelerated approval from the FDA for its pairing in May, based on findings from one cohort of a study known as KEYNOTE-021G. A confirmatory study to validate that data is currently ongoing and is expected to read out in February 2019 after Merck elevated overall survival to a co-primary endpoint.

That delay could give Roche an opportunity to make up some ground, particularly after Merck decided to withdraw its application for approval of its combo in Europe.

For the wider immuno-oncology field, though, Roche and Merck's results begin to build a stronger case for pairing checkpoint inhibitors with chemotherapy.

By comparison, Bristol-Myers and AstraZeneca plc have both sought to improve their drugs' efficacy by pairing immunotherapies together — such as Bristol-Myers' combination of the CTLA4 inhibitor Yervoy (ipilimumab) with Opdivo, which has become a standard treatment option in melanoma.

AstraZeneca's hopes were recently set back when a study testing its drug Imfinzi (durvalumab) with an experimental immunotherapy called tremelimumab failed to show a PFS benefit.

Bristol-Myers does have studies testing Opdivo together with chemo in lung cancer, and its CHECKMATE-227 study in first-line NSCLC could offer new evidence in support of putting two immunotherapies together.

Shares in Roche rose by more than 6% on the Swiss stock exchange, while shares in Merck and Bristol-Myers both fell in Monday morning trading.

View all | Post a press release
Certara Announces Release of Simcyp™ Simulator Version 21, Expanding Capabilities to Align w...
From Certara
Altasciences Expands Ligand Binding Laboratory to Meet High Demand for Bioanalytical Solutions
From Altasciences
Memgen Appoints Kevin M. Coveney as Chief Financial Officer
From Memgen
New Data Suggests More Doctors Spending Time Addressing COVID-19 Vaccine Misinformation As C...
From Sermo
Editors' picks
Latest in Clinical Trials
© 2021 Industry Dive. All rights reserved. | View our other publications | Privacy policy | Terms of use | Take down policy.
We use cookies to optimize your experience on our website and for analytics and advertising purposes. By continuing to use our site, you agree to our cookie policy. Learn more
Accept