In recent years, smartphones have become a significant real-time resource. Always with us, whether we are shopping, at the gym or waiting to see a doctor, our mobile devices are now a primary source for news, health information and much more.

But what kind of results are in-app ad campaigns delivering? It’s not always clear, and many pharma marketers are becoming concerned about the lack of transparency in their mobile ad campaigns. In a typical scenario, a marketer invests a lot of money in a campaign, the campaign runs for a time and then the marketer obtains masses of data in spreadsheets. The challenge, however, is that interpretation of this data varies. For example, do those numbers represent people who are likely to buy their product or just someone who glanced at an app for a few seconds? Or, do the numbers reveal any insights into lifestyles or behaviors? Are there any insights in the data that could be applied to future campaigns? Was the campaign at all effective? All too often, these data are at best glanced at once and quickly filed away, or worse, deemed useless to a brand’s overall objectives.

A Path to Better Insights

Forward-thinking pharma marketers are looking for newer, more transparent tools to structure and monitor their in-app ad campaigns. Many are finding a solution in advanced, next-gen data visualization tools such as the CommandCenter™ dashboard now available from Tomorrow Networks, a division of Aptus Health. The CommandCenter helps marketers to run highly-targeted campaigns, view the results in near-real time, better understand the performance of a campaign and adjust it on the fly, and ultimately gain better insight into the overall impact of a campaign.

“We wanted to give our customers a sense of the real-time pacing of their campaign,” says Patrick Aysseh, president of Tomorrow Networks. “This tool gives them a holistic view of all the creatives they were running nationally, which in some cases are 40 to 60 different varieties. That can be unwieldy to look at on a traditional spreadsheet.”

Tomorrow Networks’ mobile in-app ad campaigns start with geo-targeting. Based on the company’s proprietary and third-party data sources, they select locations—such as doctor’s offices, pharmacies and other sites—where there is likely to be a high concentration of providers and patients who are interested in, say, a diabetes drug that is new or has a favorable new formulary position. The locations are chosen based on analysis of socioeconomic demographics, physician practice patterns and prescribing behavior, insurance coverage and more. The branded drug ads, often including a variety of messaging and design options, are then rolled out to mobile devices found in those locations, appearing in popular news, weather, games and music apps.

As mobile users start to interact with the campaign messages, as measured by impressions, engagements, expansions, click-throughs and more, the data is captured and displayed on the CommandCenter map as growing bubbles in the geographic areas where the engagements are occurring. In their personal dashboard, a campaign’s sponsor can easily see on the map, for example, that an ad running near diabetes education centers in Florida is performing much better than one running near comparable facilities in Nevada. 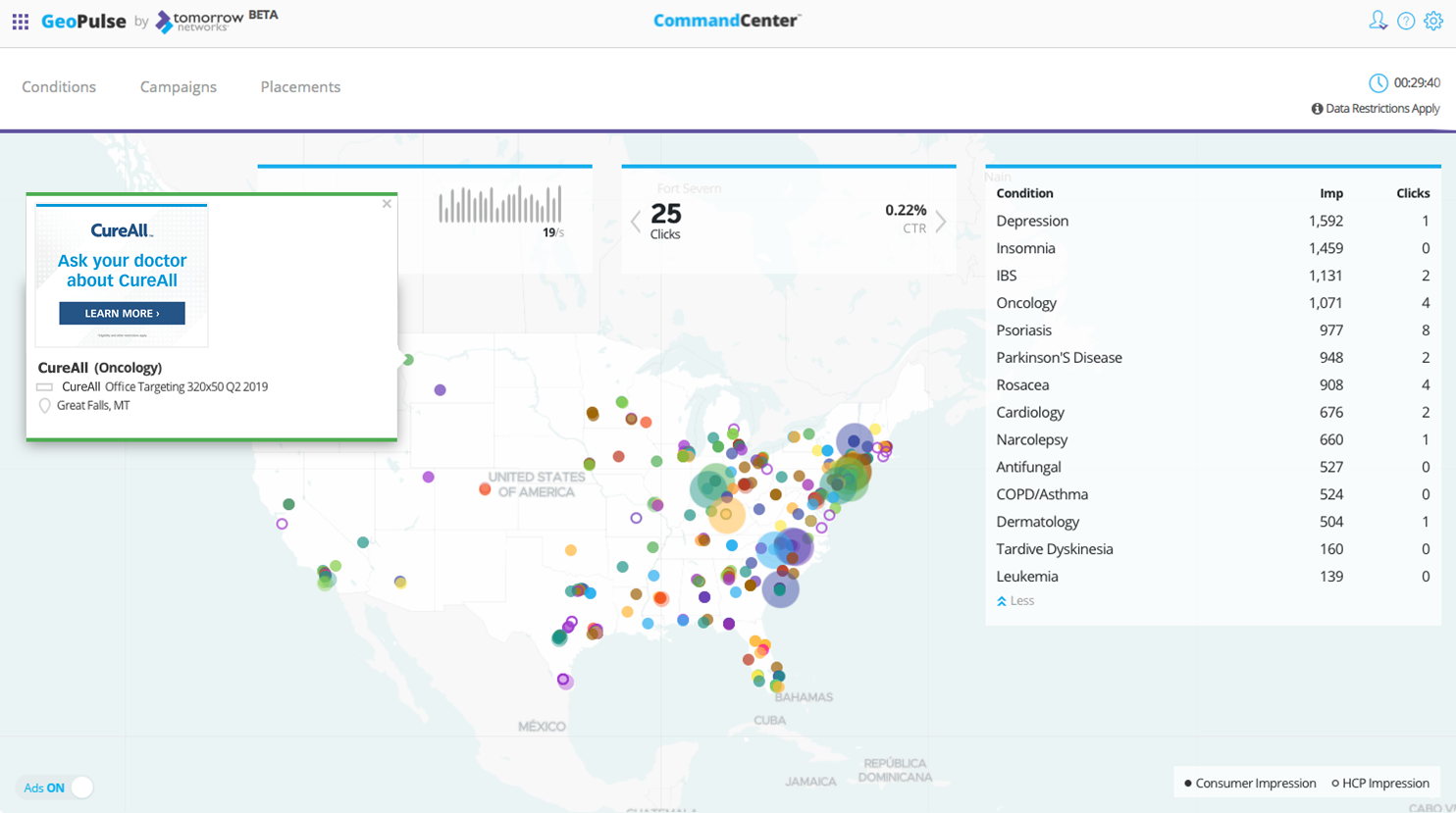 As the campaign continues to roll out and more data accumulates, the sponsor can probe deeper into the results by clicking on the bubbles, sorting the data on one of many different metrics and then displaying a chosen slice of data. For example, they can easily visualize which ad was running in each geographic area, how many impressions were delivered and how many interactions occurred. They can also see which call-to-action messages and creative executions performed better, compare all of these results for a variety of ads across locations and time, and produce on-demand reports of their findings. (Individuals are never identified, protecting their privacy.)

“The CommandCenter gives marketers a good sense for where their ads are resonating the most,” says Aysseh. “They can see exactly what’s been happening and where their messages are reaching audiences across the map.”

Marketers can also use the CommandCenter data to optimize their campaigns mid-stream. For example, the data might reveal a high-performing location, leading the marketer to work with Tomorrow Networks to expand the campaign in that area and scale it back in a low-performing area. The data might show that one ad is immediately getting a lot of engagements, prompting the marketer to invest more in that ad and pull back on others. They can also identify regions that are most responsive and increase other outreach efforts there, such as rep visits and email communications.

Taking it a step further, the data scientists at Tomorrow Networks apply machine learning to a campaign’s interim data to provide insights for even more precise audience targeting. For example, they can identify the mobile devices that received the diabetes drug ad, and enrich those results with information from other databases, adding in purchasing behaviors, language preferences and more.

They can also glean more characteristics by identifying where those devices go after the interaction with the diabetes ad. Some people might leave the geo-targeted doctor’s office and head to the gym (as indicated by a location signal), while others may head to a fast-food restaurant. This type of data can help the analysts to build distinct personas of people with diabetes, such as those who are health-focused and active and those who are likely more sedentary. With all of this information in hand, subsequent diabetes drug ads can be targeted even more precisely to resonate with a particular group of recipients.

“As a campaign is running, we’ll meet with the client to analyze the results, and come up with a solution to further optimize the campaign,” says Aysseh. “The CommandCenter visualization tool makes it easy for the sponsor to understand and digest the data and understand why we make the decisions we do in terms of optimizations. It’s almost like providing them with the tools needed to understand a different language—in this case, to help visualize the power and value of location-based intelligence and targeting.”

The bottom-line measurement of most such pharma campaigns, of course, is sales. Aysseh reports that recent Tomorrow Networks’ campaigns have resulted in an average sales lift of 4.3% across dozens of campaigns.

The CommandCenter, he says, has received rave reviews from the first users. “We want to be the best strategic partner we can be for our customers,” he says. “We’re approaching these campaigns in ways that are very different from how it’s traditionally been done. We’re trying to be very transparent in how we approach the in-app ad campaign process and how we measure the results.”