Since approval of Cosentyx in early 2015, more than 100,000 patients have been treated with the biologic. Sales climbed past the billion-dollar threshold in 2016 and have already surpassed that total through the first three months of this year. 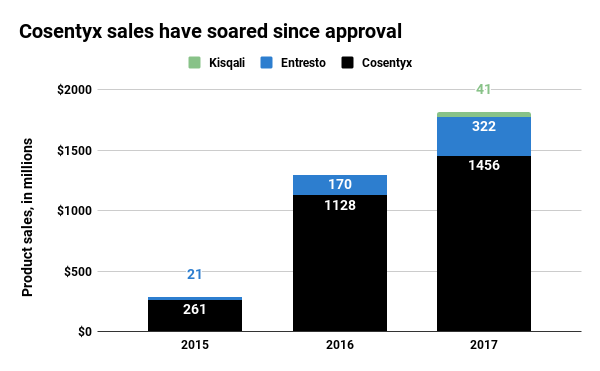 Not content to rest on its success to date, Novartis detailed this week why it believes it can further build out the market for Cosentyx — highlighting spondyloarthritis in particular.

Taken as a whole, spondyloarthritis refers to a family of inflammatory diseases that involve both joints and the attachment points where ligaments and tendons join up to bone. The condition can affect the spine as well as peripheral joints.

According to Novartis estimates, the global market for spondylarthritis in 2016 totaled $9 billion or about 15% of the $56 billion immunology sector.

In the first two subsets, Novartis is currently testing Cosentyx in head-to-head studies against Humira, dubbed SURPASS and EXCEED. In the perhaps unhelpfully abbreviated nrAxSpA, the pharma expects to read out data from a study of Cosentyx in anti-TNF naive patients treated earlier in the course of their disease.

Put together, success in these studies could help Cosetnyx perform well in markets where less than 20% of patients are treated with biologics. Within nrAxSpA, for example, only 28% of the estimated 1.1 million patients in the U.S. and five major EU countries are diagnosed — and only about 7,000 of those received biologic treatment in 2016, according to Novartis.

If Novartis can identify and reach more of those patients, hitting the nearly $3 billion in annual sales currently forecast for Cosentyx by 2018 should be a feasible objective.

View all | Post a press release
The IMA Group Announces Acquisition of Exemplar Research, Inc.
From The IMA Group
Abbott Launches New Initiative To Drive Diversity In Medical Research And Improve Care Among...
From ABBOTT
Vimian Group enters partnership with biotechnology company Angany Inc. to develop novel vacc...
From Angany inc.
Flywheel Partners with Roche and Genentech to Accelerate Development of Personalized Healthc...
From Flywheel
Editors' picks
Latest in Marketing
© 2021 Industry Dive. All rights reserved. | View our other publications | Privacy policy | Terms of use | Take down policy.
We use cookies to optimize your experience on our website and for analytics and advertising purposes. By continuing to use our site, you agree to our cookie policy. Learn more
Accept