Investors had a feeling about Loxo Oncology. Of the 74 responding to a December survey from RBC Capital Markets, more than a fifth said the cancer drug company could see takeover interest in 2019. Just a few weeks later, Eli Lilly affirmed their suspicions with an $8 billion buyout.

Fast forward eight months, and Sarepta, Sage and Neurocrine remain independent. That's likely to continue, both for them and similar companies. Because in spite of scientific breakthroughs and shareholder optimism, there is still skepticism that neuroscience drugs either won't make it to market or will be too expensive to acquire if they do.

"A lot of stars need to align for business development to actually occur," said Sumant Kulkarni, an analyst at Canaccord Genuity, in an interview with BioPharma Dive.

Perhaps the most obvious of those is a viable buyer. Typically, that means a mid- to large-cap company with billions of dollars at its disposal — a suitor that has become rarer in the neurosciences.

Pfizer, Bristol-Myers Squibb, GlaxoSmithKline and AstraZeneca all exited the space over the past decade, while fellow heavyweights like Lilly, Sanofi and Merck & Co. narrowed their focus and investments.

For companies that stayed, M&A hasn't been as attractive as it has with cancer drugs or, lately, cell and gene therapy. There have been 12 neuroscience acquisitions valued at $1 billion or more since 2009, according to Pitchbook, whereas oncology saw at least four deals of that size since December alone.

The largest deals involving neuroscience drugs were also just as much about other therapeutic areas: Pfizer got the blockbuster Prevnar vaccine from Wyeth; Takeda gained a portfolio of rare disease treatments and a global footprint through Shire; and Novartis, according to AveXis, highlighted its commitment to gene therapy, not neuroscience, when courting the biotech.

Rather, one reason for its scarcity has been the vast amount of money neuroscience biotechs are collecting from venture funds and public markets, which makes them less dependent on deals with big pharma.

That's not a new trend either. Across 14 therapeutic areas followed by BIO, neurology consistently placed in the top five for venture capital funding over the past 10 years.

"Investors have shown a real willingness to give companies the capital to find out if some of these earlier-stage products that seem theoretically promising are real drugs," Matteis said in an interview with BioPharma Dive.

The track record for finding these "real" neuroscience drugs isn't great, however, due in no small part to the complicated biology of the brain. Alzheimer's disease illustrates the challenges, as it continues to stump powerful pharmaceutical giants like AstraZeneca, Biogen, Merck and Roche.

"You can imagine, if you're an analyst or a stockholder and you saw a company in your portfolio buy a late-stage Alzheimer asset, you'd be really scared and may punish that company for doing it," Jeffrey Quillen, a partner at law firm Foley Hoag, told BioPharma Dive. 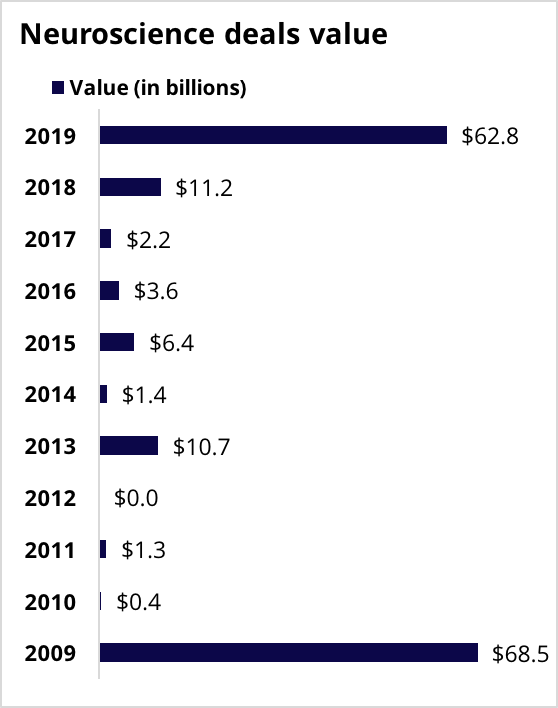 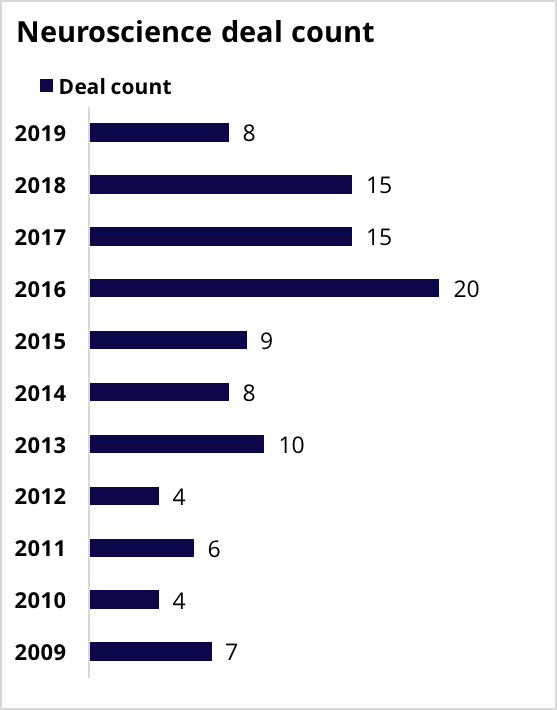 Setbacks are common in other neurological conditions too. The last year and a half saw misfires from Intra-Cellular in bipolar depression; Allergan in depression; Aptinyx in painful diabetic peripheral neuropathy; Acadia Pharmaceuticals in schizophrenia; and Astellas and Cytokinetics in ALS.

Additionally, Alkermes announced in February that the Food and Drug Administration had rejected its experimental depression drug.

"Neuroscience is very tough to run clinical trials in," Kulkarni said. "Subjective endpoints and things like that make it very difficult to get good signals to show you whether a drug actually works."

Still, a handful of companies in recent years have been able to clear the clinical and regulatory hurdles

Sage received in March the first ever FDA nod for a post-partum depression treatment. The Massachusetts biotech is testing a follow-on drug, SAGE-217, for a broader range of depression disorders.

Sarepta holds an approved product as well in Exondys 51 for Duchenne muscular dystrophy, or DMD, but its impact on patients is questionable. Regulators are currently reviewing its second DMD drug, and a gene therapy also aimed at the condition has drawn considerable attention.

Neurocrine actually brought two new treatments to market. It created Orilissa for endometriosis pain, with help from AbbVie, and discovered Ingrezza for tardive dyskinesia, a side effect of antipsychotic medications characterized by sudden, involuntary movements.

These successes are what paint Sarepta, Sage and Neurocrine as attractive biotechs primed for an acquisition. Yet they also make any buyout a pricer proposition.

Neuroscience is laden with drug failures, so companies that make it through late-stage testing often see their values soar. Shares in Sarepta, Sage and Neurocrine are up 37%, 95% and 26% year to date, ballooning their market caps to $11 billion, $8.9 billion and $7.8 billion, respectively.

As of late, premiums on acquired biotechs have ranged from around 60% to more than 100%. Should the trend hold steady, a target like Sarepta could fetch between $18 billion and $22 billion.

That's a considerable amount of money for even the biggest buyers, and still carries the inherent risks associated with drug development.

"Anytime a company pays a large premium for a pipeline-stage company, it's a credit negative event," Michael Levesque, a senior vice president at Moody's, said in an interview. "There are still R&D hurdles and the risk that the commercialization is not successful, even if the drug is approved."

And if a buyer doesn't have experience in the therapeutic markets of its target, an acquisition is more of a gamble.

In tardive dyskinesia, for instance, estimates for the patient population are "all over the map," according to Stifel's Matteis. "You could call three physicians and hear radically different things, and that's just not the case with diseases like prostate cancer."

Even Biogen, which built its business almost entirely around the central nervous system, is conservative with M&A. The company's biggest acquisition to date totaled $800 million, and it wasn't about neuroscience.

That doesn't mean Biogen, or others working in the space, won't be making any deals.

In lieu of acquisitions, companies have favored collaborations and licensures. Citing data from NeuroPerspective, an industry publication, Stifel notes that upfront payments "skyrocketed" to $2.05 billion in 2018 for partnerships aimed at disease modifying drugs for the central nervous system.

The partnerships have kept rolling into 2019 as well. AbbVie, Biogen and Regeneron inked research deals with smaller biotechs earlier this year to find new therapies for conditions like Alzheimer's and Parkinson's disease.

View all | Post a press release
Industry Dive relaunches PharmaVoice
From Industry Dive
BrightInsight Announces Partnership with Sanofi to Bring to Market a Next Generation Digital C…
From BrightInsight, Inc.
OWP Pharmaceuticals and EVERSANA Announce Partnership to Commercialize Oral Liquid Formulation…
From EVERSANA
ACTO Appoints Jenny Yeung as Chief Financial Officer
From ACTO
Editors' picks
Latest in Deals
© 2022 Industry Dive. All rights reserved. | View our other publications | Privacy policy | Terms of use | Take down policy.
We use cookies to optimize your experience on our website and for analytics and advertising purposes. By continuing to use our site, you agree to our cookie policy. Learn more
Accept