Drug Launch of the Year: Amgen and Novartis' Aimovig

Why Aimovig stands out:

As the first new preventive migraine therapy in nearly a decade, Aimovig arrived with high expectations. A lower-than-expected price pressured follow-on rivals to match in what's become a battle for market share.

Wall Street expects Aimovig, as well as its competitors, to pull in blockbuster sales. Next year, though, will be a key test for how payers will respond.

Amgen and Novartis, in winning approval for their new migraine drug Aimovig this May, laid first claim to a market Wall Street has pegged as a multi-billion dollar opportunity.

The drugmakers only had four months, however, to capitalize on that first-to-market status before similar rivals from Teva Pharmaceutical and Eli Lilly joined.

Now, in a test of pharma versus pharma, the market for preventive migraine therapies has become one of the most competitive in the industry. So much so that Eli Lilly, arriving third, announced it would give away its new treatment Emgality for free for 12 months to patients covered by commercial insurance.

Aimovig has launched strongly, enjoying rapid uptake among patients underserved by existing migraine therapies. But the question for 2019 and beyond will be whether Amgen and Novartis' aggressive go-to-market strategy can sustain Aimovig's success.

In debuting Aimovig, Amgen and Novartis surprised by picking a price that, at $6,900 per year, raised eyebrows on Wall Street. Some analysts, for example, had expected the drug to cost between $8,000 and 10,000.

"The price of Aimovig reflects the value it provides patients," Amgen and Novartis said in an Oct. 12 emailed statement to BioPharma Dive. "We set a responsible pricing model for Aimovig to help ensure it is accessible to patients living with migraine."

Assuming a standard-sized industry rebate, Aimovig's net price comes within the cost-effectiveness range set by the Institutes for Clinical and Economic Review — a rare instance of concordance between the group and industry.

Both Teva and Lilly matched the $6,900 price point with their respective therapies Ajovy and Emgality, seemingly to avoid a competitive disadvantage. Lilly and Teva also announced programs aimed at encouraging patients to try their drug, most notably Lilly's offer of a year of free treatment to those commercially insured.

"While we cannot comment or speculate on the pricing decisions for other medicines, we are confident that we have appropriately priced Aimovig to enable access for the many patients who endure the burden of frequent migraine days despite previous experience with preventive treatment," Amgen and Novartis said. The two offered Aimovig free for two months when the drug first launched. 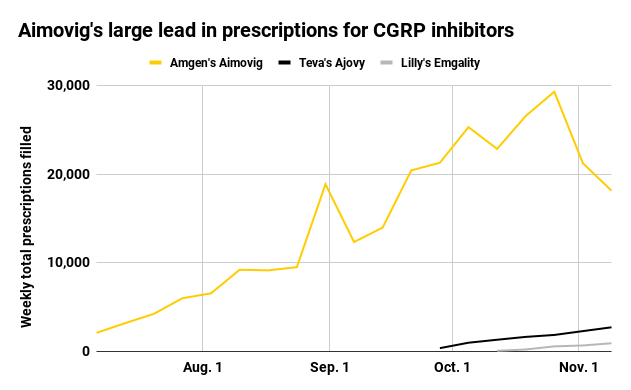 All three drugs block the so-called calcitonin gene-related peptide, or CGRP, pathway — considered important in pain modulation. They've proven effective in reducing the number of headache days per month for migraine sufferers, who have had limited preventive options for the debilitating attacks.

"From a very practical clinical point of view, what this does is it gives us new tools we can potentially use to treat our migraine patients with," Andrew Hershey, a headache medicine specialist and director of the neurology division at Cincinnati Children's Hospital told BioPharma Dive in an interview. "Because migraine patients are probably heterogeneous, the more tools we have the better we can treat the patients."

Hershey added that patients have shown strong awareness of the CGRP treatments, and response to treatment varies depending on how CGRP-sensitive the patient is. The one who are sensitive have been "getting great responses," Hershey said, although the next scientific steps will be figuring out ways to determine who is and is not CGRP sensitive early on.

"There is no clear way," the headache expert said on that idea. "It's going to take a while for the science to catch up to it and identify those biomarkers."

And while Hershey said he sees no significant difference between the three rival CGRP inhibitors, the first-mover advantage for Aimovig has allowed Amgen and Novartis to build a sizable lead in prescriptions. New weekly prescriptions — a gauge of uptake — have regularly topped 10,000 this fall.

Free drug promotions have meant little revenue to date, however. In the third quarter, Aimovig posted $22 million in sales, above market expectations but still relatively immaterial to the companies.

Investors expect each drug to eventually become blockbusters in their own right, but forecasts by the investment bank Leerink predict Aimovig will retain a majority of the market through 2020. By then a fourth CGRP inhibitor, Alder BioPharmaceuticals' epitinezumab, could be on the market as well.

Next year will be a key test for each company, as payers roll out coverage policies and free drug programs make way for commercial sales. Price, too, could percolate up again if any of the three choose to embark on the regular price increases taken annually by the industry.

"The battle is only beginning," wrote Credit Suisse analyst Vamil Divan in a early November note to investors. How it plays out will shape the fortunes of Teva and Lilly, as well as Amgen and Novartis.